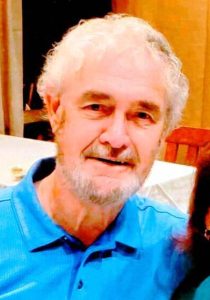 Ron was born in the Bronx, NY to Elizabeth (née Touhill) and Paul Weiscarger. Growing up, he spent his summers with his extended family in Pittston, PA. He attended St. Nicholas of Tolentine school. He was a proud U.S. Army veteran and served during the Vietnam War, before coming home and meeting his future wife, Patricia Ann, whom he married in June 1971. Ron was an electrician with Local #3 I.B.E.W. in NYC for many years before retiring in 2004.

Ron had a beautiful voice, and he sang joyfully in the St. Peter’s choir for nearly 50 years. He was very involved in the lives of his daughters, starting as a t-ball coach more than 40 years ago. He spent untold hours coaching softball teams and attending the sporting events of his girls. In retirement, Ron enjoyed the company of his friends from The Hobbyist Club, as they’d bowl, play cards, and enjoy new restaurants. He also treasured time spent with his grandchildren at every opportunity. He and Pat had wonderful opportunities to travel together and enjoy their retirement for several years.

In lieu of flowers, donations in Ron’s memory to the Tunnel to Towers Foundation, 2361 Hylan Boulevard, Staten Island, NY 10306; www.tunnel2towers.org, or the Special Olympics, 1133 19th Street N.W., Washington, DC 20036-3604; specialolympics.org would be greatly appreciated by his family.