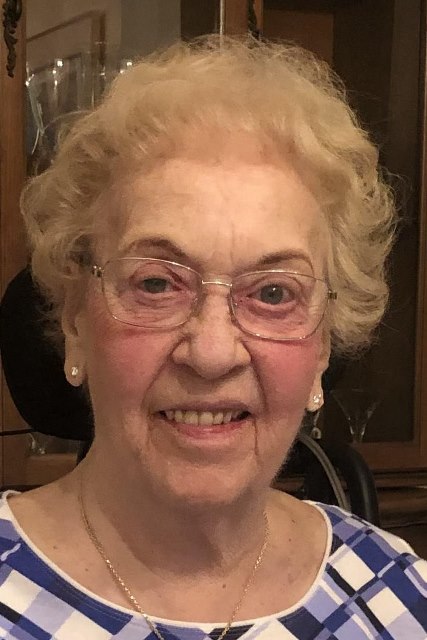 Virginia L. Hart, age 90, passed away peacefully on Sunday morning, February 6, 2022 in her home at Cedar Crest Village in Pompton Plains, NJ where she lived for the past 10 years. She died of natural causes.

Virginia was born to Virginia and William Peck on June 26, 1931 in Princeton, West Virginia, the second of four daughters. She grew up in Brooklyn, NY. During her high school years at Girl’s Commercial High School, she developed a life-long passion for dancing. She danced throughout her life, hosting many ballroom dance socials, and for years teaching others the art and skill of ballroom dancing as an instructor. Even during her 80s, she could be found enjoying life on the dancefloor at Cedar Crest.

During her early adult years while living and working in Brooklyn, Virginia met a handsome WWII Navy veteran named Joseph Hart. The two fell in love and were married on November 15, 1952. Seven years later Virginia and Joe had a daughter, Donna, and a little over a year later, a son, Steven. Shortly after Steven’s birth the young family moved into a charming home in Dumont where they enjoyed creating a warm and loving environment for their two children. Virginia and Joe remained the love of each other’s lives for 44 years when Joe died in 1996.

Early in her work career, Virginia was employed as a secretary at the New York Telephone Company. Later, after the kids were born and she returned to the workforce, she was a customer service representative with Scholastic Magazines of Englewood Cliffs, NJ. She excelled at helping people and continued there for more than two decades. Virginia was a member of the Order of the Eastern Star, State of New York for more than 70 years. She was also a die-hard Mets fan and enjoyed spending time watching baseball, along with old movies, especially those that included one or more dance scenes!

When it came time for Virginia to leave the home that the family had shared for more than 50 years, she hesitated before moving to Cedar Crest in Pompton Plains. But after few months of adjusting to the vibrant community, she discovered she could not only survive there, but she could make dozens of new friends and live a full, active life. Her conviviality and social skills made it easier than she had imagined. It was these cherished friendships, which she developed, along with the deep and unending love and support of her family that brought joy to her during her eighth decade of life. She, in turn, brought warmth and companionship to those around her and will be remembered lovingly.

Family will receive friends on Wednesday, February 9th, 4-8 PM at the Beaugard-McKnight Funeral Home, 869 Kinderkamack Road, River Edge.  Funeral services will be held on Thursday, February 10th, 10 AM at the Calvary United Methodist Church, Dumont. Virginia will be laid to rest next to her husband at Woodside Cemetery.  In lieu of flowers, donations may be made in Virginia’s memory to World Central Kitchen, which delivers food effectively to victims of disasters in the US and around the world.