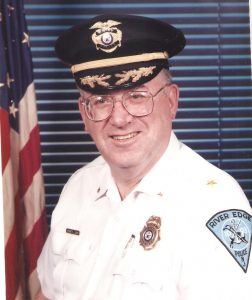 Kenneth was born in the Bronx, NY to Mary Jackson and raised by Mary and his step father John Knox.  Ken was Police Chief of the Borough of River Edge from 1984-1996. Ken and Ricky served their River Edge, NJ, community in numerous capacities, Ricky as tax collector, past president of the fire department’s woman’s auxililary, member of the ambulance corp, hospital volunteer, and church usher. Ken’s law enfocement carreer in River Edge included rising through the ranks of Patrolman, Patrol Sergeant, Lietuenant, Captain, and ulimatiey retiring as Chief of Police. Ken also served for twelve plus years as a voluneteer fireman and was a member/past president of the Bergen County NJ Chiefs of Police Association. Among his significant accomplishments as Chief of Police, Ken was instrumental in establishing security protocols in conjunction with the New York Port Authority for the city’s network of bridges. Prior to his career on the River Edege police force, Ken worked for the District Attorney’s Office in New York County, NY followed by eight years in the banking industry while also working part time in real estate and various jobs.

Ken is also survived by his wife, Christa Tromblay, whom he met and joined hearts in 2016 at Cedar Crest. They enjoyed a varied and active social life with friends old and new in their beloved Cedar Crest community. Together they traveled, read, laughed, dined, and became the sparkle in each other’s eyes, partners in life who lived according to a credo he had hanging in his apartment: “The time of life is limited – why not live it in Joy” (Leo F. Buscaglia).

Those who knew Ken appreciated his pride in his children and grandchildren, hearty laugh and quick wit, joy in exploring the world, life-long interest in learning, enless story telling, and his artistic and poetic talents,

Visiting is Thursday, August 1st, 10 AM – 1 PM, with a service at 1 PM, at the Beaugard-McKnight Funeral Home, 869 Kinderkamack Road, River Edge.  Entombment Garden of Memories, Washington Township.  In lieu of flowers, donations may be made in Kenneth’s memory to the Residential Care Club of Cedar Crest, 1 Cedar Crest Dr., Pompton Plains, NJ 07444.  For further information, please visit www.beaugardmcknight.com.