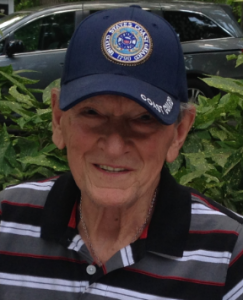 Ed was born in Hackensack in 1930, the son of Eric Boggis and Frances Volkmer. In 1948 he joined the U.S. Coast Guard and served for six years, stationed in ports from New York City to Honolulu. He was a longtime employee of the Lowe Paper Co. until his retirement in 1994.

Ed met Marie Bombino, his “beautiful Italian girl,” and the two married in 1951. They made their home first in North Bergen where they raised their family, and later in New Milford. They were married for 50 years until Marie’s death in 2001.

A devoted husband, father, and Pop-Pop, Ed prided himself on being a “tough guy,” but will be remembered most for his famous smile and the twinkle in his eye. He was a loyal New York Jets fan who loved his wife’s Italian cooking, vacations in Wildwood with his grandchildren, and the company of the wonderful neighbors who surrounded him in New Milford.