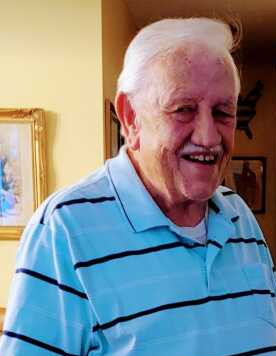 Daniel “Dan” John McCarthy (80 years young) made his last big gesture on August 26th, 2022, signing off on a very eventful life. He always thought God broke the mold after he was born to Joseph McCarthy and Anna “Anne” McCarthy (Daly) on June 22nd, 1942, in Harlem, NY. Being born into an Irish immigrant family shaped Dan’s formative and later years and resulted in a lifetime of eating potatoes, a strong work ethic and stronger family ties. Dan was constantly sick in his younger years which led to a life of being a mama’s boy and his serious addiction to WebMD. As the middle child, Dan got special attention which his brother Joe and sister Nellie would tell you led to lots of sibling rivalry. At 15 years old, his family moved to River Edge, NJ, where he lived next to his cousins, Eileen, Danny, Annemarie and Robert, who he caused a lot of mischief with, which then extended into their adulthood. Dan had a soft spot for dogs and would live a life of rescuing many… but don’t mention cats.

Dan graduated River Dell High School in 1960 and quickly joined a crew of guys working in the post office that would lead to lifelong friendships with Eric Schobel, Jim Patrizzi, Charlie Aho, and John Wissmer. He then was drafted by the Army in 1964 and shipped out shortly after to serve in the Vietnam War from 1964 – 1966 under the Army 25th Infantry Division, 2nd 32 Artillery; as a patriot these were his proudest years. His service to his country and community didn’t end after his honorable discharge. After ending his career with the post-office, Dan was a Lion’s Club member, a lifetime member of the American Legion, volunteer fireman, and longtime police officer. It was right around the time of becoming a police officer that Dan met the love of his life, Terry (outside the O.L. bathroom) and somehow hoodwinked her into thinking he was a charming individual with decorum – which couldn’t have been further from the truth! To this day we can’t fathom how he convinced our mother, a pillar of the church and person of many strengths and talents, to marry him.

Growing up in Daniel’s household, otherwise known as Fort McCarthy, was never a dull moment. If he had a day off, the furniture was sure to be moved to a new place. With 4 daughters and 1 son running about there was much yelling and much more laughing; from the many water fights to his famous singing “I can’t ride my little red wagon”. He lovingly built swing sets, countless bicycles, Barbie houses and more. During his children’s early years, he made sure to set in place the value of how to order late night pizzas for after his midnight shift and what tv shows were integral in enriching his children’s lives; Honeymooners, MASH, All in the Family, and Cheers, to name a few.  Daniel was also a consummate napper – he took the art of napping to a whole new level. Falling asleep in his recliner was a sure thing, the car if he was waiting for one of us definitely, and the occasional friend’s house was probable. There wasn’t an occasion too formal or an event too engaging that Dan didn’t interrupt with his voluminous snoring or the occasional talking in his sleep “24, 36, choo choo”.

After retiring from the River Edge Police Department after 30+ years on the job, Daniel took a hardcore interest in genealogy. He loved digging into his family’s history, with the help of the internet, letters to strangers, a few trips near and far, Daniel was hooked. We don’t know exactly how far back he got, but he had finally decided to start planning a trip to Ireland to meet and discover his family roots.

Dan is pre-deceased by his dear parents and brother Brian. Left to quarrel over his vast fortune and “treasures” are his wife Terry and his 5 children, Dawnmarie McCarthy of River Edge, NJ, Brendan McCarthy (Heather McCarthy) of Myrtle Beach, S.C., Colleen McCarthy-Enriquez (Peter Enriquez) of Kenilworth, NJ, Shannon McCarthy of River Edge, NJ and Brighid McCarthy (Danny Guzman) of East Rutherford, NJ. If there was one thing that he would say he was extremely proud of, it was his 8 grandchildren. He relished his role of Grandpa/Pop Pop to Brianna, Lauren, Aydon, Alicia, Scarlett, Meadow, Ronan and Ciarán. Left with at least a few colorful memories are his siblings Joseph (Pame) and Mariellen, as well as the vast number of cousins, in-laws, nieces and nephews.

Services are as follows: