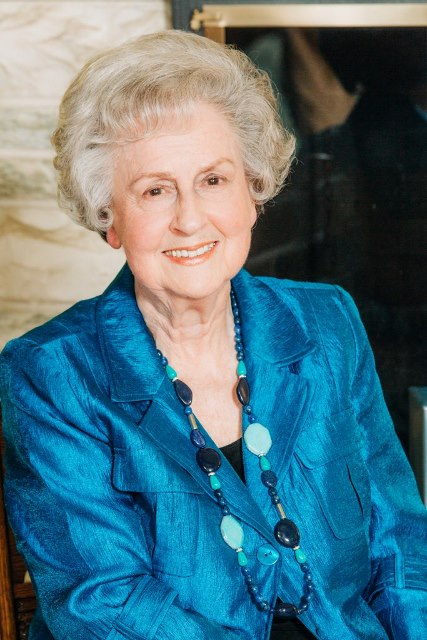 Beryl was born on March 27, 1924 and raised in the beautiful and lush suburbs of Sydney, Australia.  She was the middle child of 5 siblings, Eileen, Norma, Beryl, Arthur and Audrey.  Arthur and Mary O’Hare were her proud parents, he an optometrist and she a homemaker.  Beryl went to Catholic schools and took the train into the city, Sydney, to attend high school.  Beryl was a member of the greatest generation and when WWII broke out she began working in the communications field for the Australian government.  Once the US entered the war, Australia was host to many US service men assigned to the Pacific Theater.  Beryl met Captain Joseph Skalski, an American pilot, on a group date to the theater.  It was love at first sight.  Joe would visit Beryl whenever his assignments would allow and ultimately he proposed and they were married in Sydney on April 7, 1945.  The war was still raging in the Pacific so Joe returned to his unit and Beryl waited for him at her parents home while continuing to work. It was decided that due to the GI bill and benefits Joe could secure in the states, that they would relocate to the US.  This was a huge step for Beryl who had been a somewhat timid child.  But their love was strong and they made plans.  Beryl joined a ship full of Australian war brides and headed to the US, taking 3 weeks to arrive in San Francisco.  From there she boarded a train to make her way across the country to Jersey City, NJ.  By the time they arrived, Beryl was the last woman on the train and she embarked to the nighttime skyline of a dimly lit NYC.  She would tell the story of how unimpressed she was at that first sight, but later in the daylight appreciated the big city.

Joe returned to the states with the Army Air Corps and met Beryl at the train station.  They started married life in Palisades Park, NJ.  Joe attended  Columbia University Pharmacy School on the GI bill, while Beryl went to work for the Australian Embassy in NYC.  Although it was a bit lonely and Beryl was a bit homesick, she made friends easily, overcame some obstacles and settled in.  Beryl and Joe’s first child, Yvonne, arrived on July 2, 1947, followed by 3 more children, Debbie, Pam and Richard.  With all those children spanning 13 years, Beryl gave up her work at the Embassy and became a full time homemaker, wife and mom. They moved to River Edge, NJ in 1956 where they remained for the rest of their lives.  Beryl had amazing talents in particular her cooking and her expert seamstress skills.  She used these talents for her family and in the many volunteer activities that she took on.  She sewed all her children’s clothes, including school clothes, pajamas, elaborate Halloween costumes and even wedding and  bridesmaid dresses.  She assisted the HS Marching Band by sewing all the fire baton uniforms and assisting with lighting and controlling the batons themselves.  She made over a hundred cheer leading skirts for the town cheerleaders, was a Girl Scout Troop Leader, and was a Class Mom numerous times over the years.  In addition, she ran the town Little League, including keeping the books and selling the hot dogs.  She also was a devoted parishioner of St Peter’s Church in River Edge and spent many hours cleaning and shining up the church and as a member of the Rosary Society.  These are just a few examples of her many efforts.  She was also known as the mom all the children on the block could run to in a crisis; these children now grown up, still remember her kindness and help.
Later in life, to help put their children through college, Beryl gave up her volunteer activities and reentered the outside workforce.  She went to work in the food service industry where she could use her excellent cooking and organizational skills.  She quickly rose to the level of manager and was a most valuable employee, managing the more difficult locations throughout northern NJ for Woods Inc. She was a recipient of Manager of the Year Award more than once.  Beryl’s work ethic kept her working until she turned 77 when her knees finally told her it was time to retire.
Beryl spent the last 22 years of her life with her husband until his death in 2011 and continuing to assist her children and their growing families.  After 30 years away from her home in Australia, Beryl got to return to see her mom and siblings; sadly her father had died before she could see him again.  After that initial trip, she was able to return 3 more times and spend many wonderful hours visiting friends and relatives and basking in her beloved Australia.  She got the opportunity to relive her carefree childhood days in the city of Sydney, on the beautiful harbor, smelling the flowers, and eating the abundant tropical fruit.  She also got to revisit her uncle’s sheep station where had she spent many summer vacations riding the cows, mustering the sheep and having barbecues at the bottom of the big hill using a metal tin grill while waiting for the billie to boil. Beryl spent her last days with her children.  If there was one phrase to describe Beryl it would be that she was always a lady; stylish, perfectly dressed for any occasion and with not a hair out of place.  She was always friendly to all she met, polite, engaging and ready to share a warm cup of tea and a good conversation..