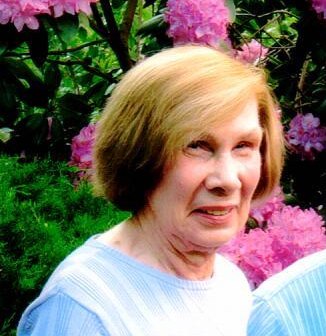 Anna Bruno, 82, of Paramus, passed away peacefully with family by her side on Wednesday, July 27, 2022 at Valley Hospital in Ridgewood.

Anna was predeceased in 2017 by her husband of 55 years, Michael, and her brother-in-law, Gerhard H. Bay, in 2014.  She is survived by her three children:  Peter, of North Haledon, NJ; Joseph and his wife, Monique, of Marietta, GA; and Christine, of Bergenfield, NJ; her three grandchildren:  Haylei, Kathryn and her fiance̕, Sean; and Joseph; her sister, Margaret L. Bay; her niece, Linda A. Callahan and her husband, Daniel Callahan; and her nephew, Mark A. Bay and his wife, Elizabeth Bay.

Anna was born in the Bronx, NY, to Anna (ne̕e Scharf) and William Buckermann.  She worked for Chase in New York City before her marriage in 1961.  After marrying, Anna and Michael lived in Palisades Park, NJ and Ridgefield, NJ.  Primarily a homemaker, she also worked part time for many years at J.J. Fabrics, Warjac’s and Silly Goose, all in Palisades Park, NJ, and later at The Corset Bar in Paramus, NJ.

Upon retiring in 2003, Anna and Michael moved to Whiting Station in Whiting, NJ.  Anna was a long time volunteer for the Whiting Station Resident’s Club Library, where she worked her way up the ranks to the most senior position.  Volunteer library work was a recurring theme throughout her life, as she had previously worked in the library at St. Matthew’s School in Ridgefield, NJ, while her children attended Elementary School there; and later on at the Ridgefield Free Public Library.  She was also a volunteer Den Mother when her sons were in the Cub Scouts.

Anna enjoyed spending time with her family, reading, sewing, knitting and many other types of needlework and crafts, as well as doing crossword and Sudoku  puzzles.  Like her late husband, Michael, she was a long time New York Mets fan.  She drove a hard bargain with appliance repairmen and legend has it that she once made the Maytag Repairman cry.

Visitation Saturday, August 6th from 9:30 to 10:30 AM at the Beaugard-McKnight Funeral Home, 869 Kinderkamack Road, River Edge, NJ  07661.  A Funeral Mass will follow immediately at 11:00 AM at St. Mary’s Church, 280 Washington Avenue, Dumont, NJ  07628.  Cremation is private.  In lieu of flowers, please consider a donation in Anna’s name to The American Lung Association.