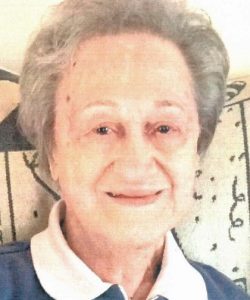 Ginny grew up in Fort Lee, graduated from Fort Lee High School and then the Englewood Hospital School of Nursing in 1946. She married John Collins on June 1, 1947 and had two children, Glenn and Lynn. After the passing of her beloved husband John, Ginny worked hard has a single Mom to give all she could to her children. Ginny was not one to make a fuss over herself and always cared for anyone who needed her.  She worked as a nurse in the office of Dr. Bayer and Dr. Marley where she shared her kind and calming personality with the community until she retired after 30 years.  Ginny enjoyed her adventures with her close-knit group of friends including river rafting the Colorado. She spent a lot of time in the company of her late Aunt Dot Cooper and her late mother, Katherine Anderson; they were an inseparable trio. She was devoted to her family and enjoyed their summer vacations at Long Beach Island, camping trips and many family reunions.  But more than anything Grandma Ginny, aka GiGi, enjoyed being with and playing with her grand-children and great-grandchildren and will be an ever-present spirit in all their lives.   We are all blessed to have had known her, she will be deeply missed.

Visitation will be held on Sunday, Nov. 7 from 4-8 PM at the Beaugard-McKnight Funeral Home, 869 Kinderkamack Road, River Edge. A memorial service will be held at the funeral home on Monday at 10AM followed by interment at George Washington Memorial Park in Paramus.  In lieu of flowers donations may be made in Virginia’s memory to the Veterans of Foreign Wars.