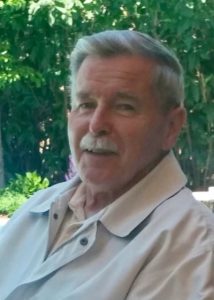 Thomas R. Lynch, 78, of Wyckoff (formerly of River Edge), died peacefully on April 16, 2020 under hospice care at the Christian Long Term Health Care Center of Wyckoff.  Born in the Bronx, NY to the late Michael J. and Anna (née Beutner) Lynch.  Tom was a proud U.S. Navy veteran and proud shipmate with his brother Michael on the USS Forrestal CVA 59.  After leaving the Navy, Tom followed in his father’s footsteps with employment at Consolidated Edison, Company New York City.  Like his father, Tom was a true union man, fighting for the rights and dignity of the rank and file.  He retired from the company after 37 years of dedicated service.  Tom will be remembered as a “man of many hats” who enjoyed working with his hands.  His heart and soul were happiest at his home on his beloved Cape Cod.

All services are private. A celebration of Tom’s life will be scheduled at a later date.  As an expression of sympathy, donations may be made in Tom’s memory to the Graymoor Franciscan Friars of the Atonement, 40 Franciscan Way, Garrison, NY 10524; www.atonementfriars.org/graymoor-holy-mountain.