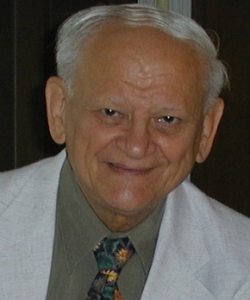 Ted was born to Annie (nee Sopel) and John Grybowski and raised in the Bronx, NY. He attended Stuyvesant High School and his college education was interrupted by military service. He trained in the Army Air Force in Texas and Mississippi. Ted received a Bachelor of Science Degree in Electrical Engineering from Manhattan College. He went on to earn a Master of Science Degree in Electrical Engineering from New York University.

In the summer of 1951, while vacationing at a singles retreat in western New Jersey, Ted recognized a woman who lived in his neighborhood, Eleanor Doris Dunning. When the two returned to the Bronx, they started dating and were engaged on Christmas Day 70 years ago.

Ted and Eleanor married in June of 1952 and moved to River Edge in 1956 with their two oldest sons. They remained in River Edge and expanded their family to six children.

Ted was an active member of St. Peter the Apostle Parish in River Edge and served as Trustee and as a Eucharistic Minister. He also volunteered for the River Edge-Oradell chapter of Starfish, an interfaith group that provided transportation services to elderly and disabled clients.

The majority of Ted’s career was spent with Western Union in NYC, Mahwah and Upper Saddle River, NJ. In the 1960s, Ted also taught math at Pratt Institute. After retiring from Western Union, he worked for Hamilton Communications, and later started his own electrical engineering consulting firm, Electromagnetic Consultants.

Ted had a lifelong love of photography and of hunting down bargains at local garage sales. In his younger years, Ted was an amateur radio operator (W2ELY) and in more recent decades developed an interest in personal computer repair and custom assembly. After retirement, Ted and Eleanor travelled to Ireland, Russia, Poland, and Croatia, and visited the Thousand Islands in New York State at least yearly.