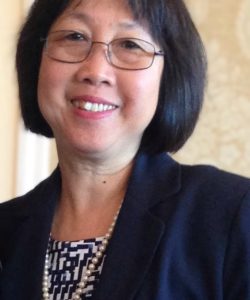 Pui was born September 20, 1951, in Canton (Guangdong), China, before moving to Hong Kong, where she spent most of her childhood. She came to New York with her family when she was 17 and quickly adapted and excelled in her academics, going on to graduate from Baruch College with a degree in accounting. She enjoyed a 41-year career as a financial analyst at MetLife, commuting every day to the city after moving with her husband and two children to River Edge, New Jersey.

Pui’s hobbies included reading and crocheting, and she was very involved in parish activities at St. Peter the Apostle Church in River Edge. Her Catholic faith played a central role in her life alongside her husband Peter, whom she was baptized with at The Church of the Transfiguration in Chinatown, where they were active members in the choir and  young adult groups, such as the Four Seas Players where Peter worked on building sets and Pui was the stage manager.  As a central fixture at St. Peter’s in River Edge, she sang in the choir, counted money from weekly collections, and held leadership roles in Pre-Cana weekends, Cornerstone retreats, and the annual Christmas tea, while engaging in regular community service by working at St. Martin’s Kitchen in Jersey City and crocheting blankets for Project Linus (donations to individuals in need).

Pui’s life was defined by her kindness. She was generous not just with money but with her time, her energy, and her love. She prayed earnestly for those in need and lent a hand wherever she could. Many friends and family members, especially those with young children, were the recipients of Pui’s wonderful crocheted blankets. Alongside her husband, she cared regularly for her grandchildren. Her children and grandchildren received red envelopes with far too much money for their birthdays.

Pui loved to travel, and could have been a spokesperson for Viking Cruises. She and Peter regularly befriended and assisted isolated or infirm travelers on their trips, and always came home with great stories and new friends. She and Peter were timeshare owners and she generously shared with the family, sending others on vacations as often as she went herself. Though her family often teased her for being clumsy and having too many leg cramps, she was an impressive and adventurous outdoorswoman who challenged herself on difficult trails in Arizona and scaled the formidable Half-Dome in Yosemite National Park.

Pui is survived by her husband, Peter; her brother Keith Hui and his wife Joyce; her brother Kai Hui; her son, Jonathan Ng, and his wife, Kathryn; her daughter, Christine Hickey, and her husband Sean; and her four grandchildren, Gabriel, Brooklyn, Zachary, and Penelope.

In lieu of flowers, the family asks that donations be made in Pui’s name to St. Jude’s Children’s Hospital.