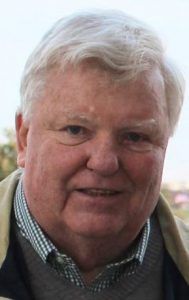 Edward F.P. Lane, of River Edge, NJ peacefully entered into eternal life Sunday, May 9, 2021 at Valley Hospital surrounded by his family.  He was born in Jersey City on October 11, 1939 to the late Catherine (née Kelleher) and John Lane.  Edward was a graduate of St. Peter’s College and retired as Financial Advisor and Vice President of Royal Alliance, Old Tappan, NJ.  Previously he held the same position at EFHutton, Merrill Lynch, Wells Fargo, Paine Webber and UBS.  He proudly served his country in the U.S. Air Force, ranking as Second Lieutenant, and a member of American Legion Post #0226.  He served his community as an elected Town Councilman for 12 years, and was also a member of the River Edge Planning Board.  Edward was a faithful parishioner of St. Peter’s R.C. Church where he was President of the Parish Council and member and Past Grand Knight of St. Peter’s Knights of Columbus, Council #5015, and was also a member of the Ancient Order of Hibernians.

Edward was the beloved husband of 51 years of Sheila (née Sutton), devoted father of Kathleen (Christopher) Caslin, Maureen Lane, Eileen (Fiachra) Grisewood, and, dear brother of John (Mary) Lane, Jr., Thomas and Mary Lane.  He will be sadly missed by his cherished grandchildren, Andrew, Kiera, Ronan and Orla.  Also survived by many loving nieces and nephews.