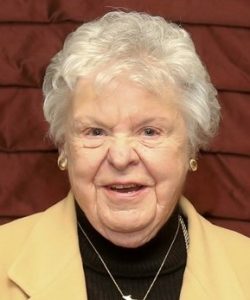 Betty E. Hoehne, 91, of Ridgefield, NJ passed away on Friday March 5, 2021.  Born January 4, 1930 to the now late August and Bertha (Rossel) Hoehne, Betty was predeceased by her brother August Hoehne, Jr., cousin Roberta Caruso and her dearest friend June H. Plihal. Betty is survived by her cherished cousin Robert Olsen and his wife Cynthia and by her great friend Ellen Madden who acted as her eyes in later years and helped her in so many ways, not the least of which was including her as an honorary member of the Madden family. She was blessed to be Nana Betty to her “adopted” grandchildren Grace, Ella, Lily, Tommy and Harry Madden, Whitney Moffa and Brendan Reisch.

Following in the footsteps of her parents, who were early founders of The Arc of Bergen and Passaic Counties, Betty had a long volunteer history with the organization including past president of The Arc Foundation, long term member emeritus of The Arc Board of Trustees, Chair of the Development Committee and member of the Golf and Tennis Committee to name just a few. Inspired by her brother Gus, Betty was a champion of The Arc’s cause and an unwavering advocate for individuals with developmental disabilities.  Betty was The Arc Bergen-Passaic’s 2005 Volunteer of the Year and was honored by The Arc of New Jersey with their 2016 Spirit of The Arc award. In 2018 The Arc dedicated their Child and Family Center in Oakland to Betty in honor of her service and generosity to The Arc.

Betty was a woman of many interests including travel, music, theater, opera, and literature which she shared with her late friend June. She was an avid golfer and a big sports fan and was still hosting her annual super bowl party at age 90.  Betty was loved and respected by all who knew her and will be missed by her own family, her Arc family, her Madden family, and her many, many friends. She lived a life of caring and the impact of her philanthropy will live on for years to come. In lieu of flowers, memorial donations may be made to The Arc of Bergen and Passaic Counties 223 Moore Street Hackensack, NJ 07601 www.arcbp.com.  Visitation – Tuesday, March 9, 2021, from 10 am-12 noon at the Beaugard-McKnight Funeral Home, 869 Kinderkamack Road, River Edge NJ followed by a private service at the cemetery.