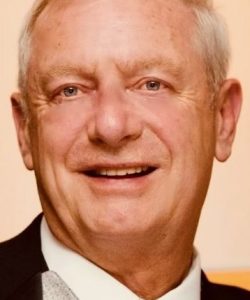 Al was born on June 22, 1943 in Jersey City, NJ to John and Helen (née Serafin) Greczylo. He received his Bachelor’s degree from St. Peter’s College in 1965 and served in the United States Army, completing a tour in Vietnam. He spent his career with the State of New Jersey Department of Personnel, where he devoted 36 years before embarking on a happy retirement.  He met his wife Mary (née Twomey) at a dance he was originally supposed to attend with someone else, and only approached Mary just as she was walking out the door to leave. That lucky encounter led to their marriage in 1969 and four daughters, all raised in Lawrence Township, NJ, where Mary and Al lived for 45 years before moving to River Edge, NJ.

Al enjoyed many activities, including fishing, cooking, and sitting in his favorite chair. But by far, his favorite times were spent being content in the company of his family.

Al was preceded in death by his father, John, and his mother, Helen. He is survived by his wife Mary; his daughters and their spouses Karen Kapp, Christine and Sean Gilbride, Katie and Jason Escaravage, and Kelly and Nick Scott; his brothers and their spouses John and Dolores, and Richard and Richard; and his six grandchildren Caroline, Ryan, Owen, Helena, Alice, and Leah.

No service will be held. In lieu of flowers, donations may be made to New England Disabled Sports; https://nedisabledsports.org.